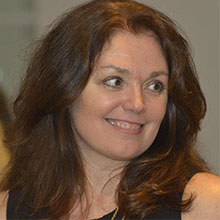 As the founding producer of the CES FitnessTech Summit, Julie has over the past six years become a torchbearer for the FitnessTech world. Establishing the summit as the industry was in its infancy, she has guided it as fitness technology has become pervasive in our everyday world. This year the FitnessTech Summit is twenty six times as large as the year it was introduced. Along the way, Julie has become a spearhead and conduit not only for the FitnessTech world, but now the emerging Wearable Tech industry as well which took its foothold in fitness. Asked to share her experience and insight from Wall Street seminars to various events and conferences around the country, Julie is proud to have stayed at the forefront of both the Fitness and Wearable Tech industries as they continue to exponentially evolve.

Prior to her involvement in the world of technology, Julie’s universe was theater. Many years an actress, then a theater company manager, finally she and her husband formed their own New York production company, Julie & Friends/Akiz Productions which produced not only theater but private and corporate events. It is with these skills that she has definitely made a smooth transition into the universe of tech. When she finds the time, Julie keeps her hand in theater, as a former board member of the League of Professional Theatre Women she continues to work with them in their pursuit of parity.